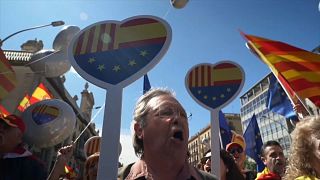 It’s against the secessionist movement in Catalonia.

Holding Spanish flags, the official “Senyera” flags of Catalonia as well as European Union flags, demonstrators demanded the election of a leader “for all Catalans” to the regional parliament.

Sunday's demonstrators oppose the possibility of electing the jailed leader of the region's independence movement Jordi Sanchez as Catalonia's next president.

It was organised by the unionist Catalan civil society group, who estimated 200,000 people attended, local police estimated there were only 7,000 demonstrators.