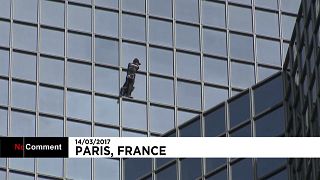 Famous French climber Alain Robert escalated another skyscraper in the Paris business district of La Defense Wednesday; his first climb since he broke his wrist in July last year.

Robert successfully reached the top of the Total building, which is 179 metres (587 feet) high.

Earlier in the morning he tried to climb the nearby Engie Tower, but was prevented from doing so by firefighters.