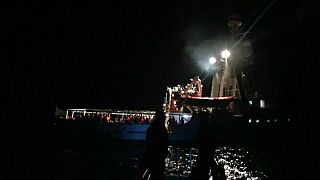 Hundreds of migrants rescued in mediterranean

Several hundred migrants have been rescued on Saturday from the Mediterranean. A charity ship Aquarius, which is operated by Berlin-based NGO SOS Mediterranee and Doctors Without Borders, as well as Libyan coastguard vessels carried out the night-time rescue.

Officials on board the Aquarius processed the mirgrants as they boarded the ship. Rescuers said the migrant boat was on the verge of completely sinking when they reached them. More than half the migrants were Nigerians, with the rest from other sub-Saharan African countries as well as two Palestinians.