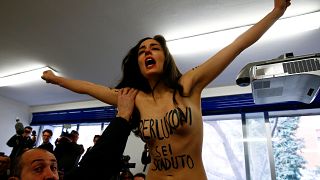 A Femen activist interrupted voting at Silvio Berlusconi's polling station in Milan on Sunday as he waited to vote.

The protester jumped on a table in front of the former prime minister and shouted: "Your time is up, Berlusconi!" before security officers escorted her out of the polling station and took away in a police car.