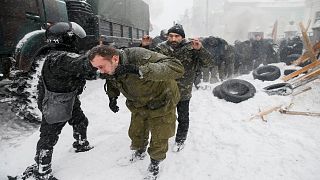 Several people were injured and more than 100 detained after clashes between Ukrainian police and anti-government protesters in central Kyiv early on Saturday. The violence broke out when officers moved in to remove an activists' camp near parliament.

The makeshift tents were set up last autumn by supporters of Ukrainian opposition leader, former Georgian president Mikheil Saakashvili, after he was stripped of his Ukrainian citizenship. Despite protesters' demands to reinstate his right to live in Ukraine he was deported to Poland last month.

The majority of Saakashvili's supporters left the camp after his departure, but a few dozens activists decided to stay. Grenades, Molotov cocktails and smoke bombs were all found in the camp during the raid, police said.

The camp is an offshoot of a broader opposition movement which regularly holds protests in the capital to demand the resignation of President Petro Poroshenko.