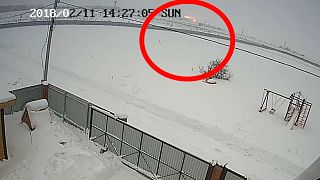 A home security camera captured footage of Saratov Airlines flight 6W703 crashing in a field in the Moscow Oblast on Sunday.

Russian authorities said all 71 people on board the Antonov An-148 died when it crashed shortly after take-off from Moscow on its way to the Urals.

The cause of the crash is not yet known.

The Ministry of Civil Defense released a list of the passengers and crew.