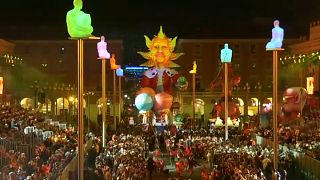 The city of Nice on the French Riviera is in full carnival swing with the theme of one of this year's floats parade the "Planet of the Apes", with every portrayed celebrity taking on a simian guise.

That's created a bit of a stir, as the float's creator has taken on some heavyweight targets.

"I'm working on one of the floats, which is called 'Planet of the Apes'. So we have four main characters, which are the heads of state - you have Trump, you have Putin, you have Theresa May, you have Erdogan. And you have a rocket in the middle which has crash landed on this new planet and you have an astronaut who comes out and discovers a primitive world, where people are acting irresponsibly," said artist Cedric Pignataro.

In the case of Donald Trump the effigy presented some particular challenges.

"We tried to go with the character traits of the people that we worked on. In the case of Trump, we wanted to make an image, it's really an image of what he is. He's in the corner, his strong character, with his very pronounced hair but at the same time very fine and very light, and his very orange face, one could almost say he goes to tanning sessions. And you have the white marks on the eyes. We tried to contrast both what we all know of his image, from the media, and also caricature him with colours that remain carnival-like," says Pignataro.