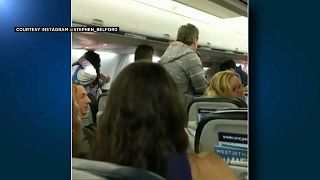 The crash sparked a fire and forced passengers to evacuate on emergency slides.

Passengers on the WestJet flight and were waiting to get off the plane when a Sunwing aircraft backed into it.

WestJet said the inbound aeroplane from Cancun, Mexico with 174 people on board was stationary and waiting to approach a gate when it was hit by the Sunwing aircraft.

The other aircraft was empty and being towed.

All passengers were safely evacuated but one member of the airport's emergency service was said to be injured. The incident caused some delays to other flights.

Canada's Transportation Safety Board is investigating the incident.