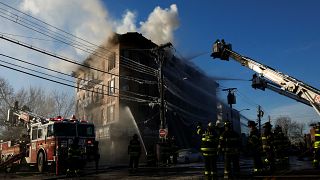 Over 20 people have been injured after a fire broke out in the Bronx neighbourhood of New York.

It comes less than a week after another blaze in the same area killed 12 people - the city's deadliest residential fire in almost 30 years.

More than 200 firefighters tackled the blaze, which ripped through a four-story building housing a furniture shop and apartments.

It is unclear what caused the fire, but it is thought to have started in the furniture store on the ground floor.

Smoke and flames could be seen reaching the top floor as firefighters smashed windows to reach people trapped inside their flats.

Bitter cold made the fight against the fire especially difficult. With temperatures in the teens, icicles could be seen forming on the power lines in front of the building.

The fire broke out on Tuesday morning in the Van Nest neighbourhood at around 5.30am.

The Red Cross is helping about 22 people who have been displaced.

Residents who were forced out in the cold were staying warm on a city bus.