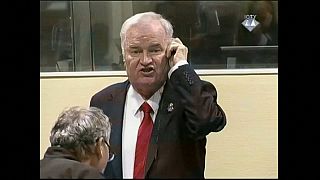 Ex-Bosnian Serb General, Radko Mladic was ejected from the UN Tribunal on War Crimes after creating a disturbance.

It did not change the outcome of his case, which shortly before he was sentenced to life imprisonment for genocide, war crimes, and crimes against humanity. The charges relate to the massacre of 8,000 Muslim men and boys at Srebrenica.