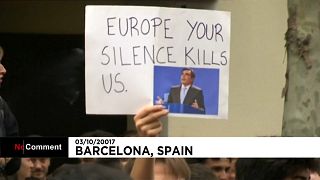 Demonstrators protest against the Spanish government in Barcelona

Demonstrators gathered outside the People’s Party (PP) Catalan regional headquarters in Barcelona on Tuesday in protest against the Spanish government, days after hundreds of people were hurt as Spanish police tried to disrupt an independence referendum.

A group of Barcelona fire-fighters in uniform joined the protesters, creating a cordon between the protesters and police officers, in an effort to avoid confrontation and to simmer tensions that have been building since the vote took place on Sunday. Fire-fighters later held a separate protest in Barcelona.

Pro-independence groups and trade unions in Catalonia called a region-wide partial strike for Tuesday in protest against Madrid’s measures to stop the referendum.

Spain’s two largest unions said on Monday they would not take part, calling for dialogue between the central government and Catalonia, criticising both the call for independence and the heavy-handed police tactics.