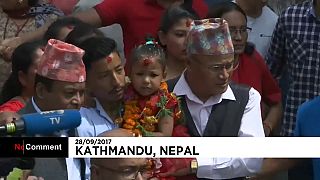 A three-year-old girl has become Nepal’s latest living goddess, revered by both Hindus and Buddhists in the Himalayan nation.

Trishna Shakya’s life was turned upside down on Thursday.

The toddler was calmly sitting on a bed at her home in Kathmandu, wearing a ceremonial dress, when neighbours started flocking to her, bowing and touching her feet with their foreheads – a gesture considered the highest form of respect among Hindus in Nepal.

Crowds of well-wishers waited outside her house as her father carried her out and took her to the temple palace in the heart of the Nepalese capital.

“It is a very proud moment for us. I am very happy but at the same time a little bit emotional. It is a little difficult for me,” he said.

As living goddess — locally called Kumari — Trishna Shakya is set to spend many years in the palace, before puberty hits.

“It is our tradition that after the Kumari reaches the age of 12 she is retired to be replaced by a new one,” said priest Gautam Shakya.

“So when a new Kumari is selected, priests from different temples get together to review the horoscope of the candidates, and the head priest will select the one who is believed to bring good things to the country.”

Soon after Trishna entered the palace, the previous living goddess, Matina Shakya, left from a rear entrance on a palanquin carried by her family and supporters.

The ceremony took place on the eighth day of the two-week long Dasain festival, the country’s main festival.