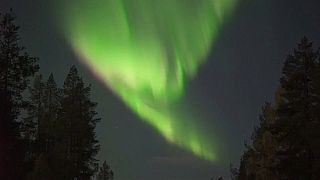 Colourful lights danced across the sky in striking aurora displays over northern Finland early on Friday.

Travel magazine ‘All About Lapland’ posted a video on social media of the impressive light show seen from Pallas, in the Muonio region.

Editor Alexander Kuznetsov said he had driven 500 kilometres to find clear skies to film the Northern Lights and that he had rarely seen anything on this scale.

A strong geomagnetic storm was behind this week’s particularly stunning show.