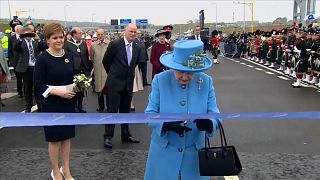 The Queen was welcomed by Scotland’s First Minister, Nicola Sturgeon, and spent some time talking to people at the south end of the bridge, including the construction workers, local officials and school children.

The bridge was blessed by the Church of Scotland’s Moderator, The Right Rev Dr Derek Browning.

The monarch – who is to become a great-grandmother again, after it was announced on Monday that Prince William and the Duchess of Cambridge are expecting their third child – cut the blue ribbon on the 1.35-billion-pound road bridge, to cheers from the watching crowd.

The ceremony comes 53 years after the Queen opened the neighbouring Forth Road Bridge.

The Queen, accompanied by her husband, Prince Philip, then travelled by car across the bridge while the Red Arrows performed a fly-past and a flotilla of boats travelled under the bridge as the national anthem was played.