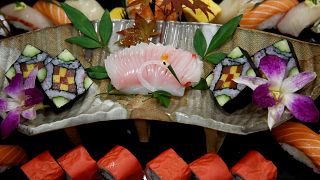 Sushi might have originated in Japan, but this year’s winner of the country’s World Sushi Cup is a Russian, who runs a restaurant in Norway.

In all, thirty sushi chefs from 15 nations battled on Friday (August 25) in Tokyo for the title for the most creative sushi plate of the year.

The annual competition was held on the sidelines of a seafood expo in Tokyo.

Judges decided the winner based on the creativity and originality of their sushi plate, which consists of about 20 to 40 pieces of sushi. They also looked at their preparation techniques and skills.

Making traditional Japanese sushi is not easy. Chefs have to mold the rice to just the right size and consistency, a technique that requires lots of practice and talent.

Chefs carved, burnt and patched their ingredients into the shapes of birds and flowers, with lucky spectators at the end getting to taste the finished product.