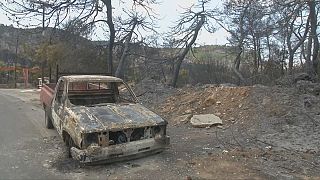 Firefighters today (August 16) managed to contain a wildfire close to Athens that had been burning out of control for nearly four days.

The fire broke out on Sunday (August 13) in Kalamos, around 45 km northeast of the capital, and spread quickly to three other towns due to strong winds.

Limiting the wildfire was made difficult due to rugged terrain, but Prime Minister Alexis Tsipras said Greece had “avoided the worst” but had to “remain alert”.