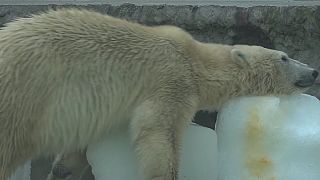 Two polar bear cubs named Beliy and Seriy have been given ice cubes at Budapest Zoo to keep them cool in the sizzling heat.

Temperatures reached 38 degrees Celsius in the city on Friday.

The two-year-old cubs, whose names mean white and grey in Russian, came from Moscow Zoo.

The cubs were also given cold watermelons and could be seen splashing around in their enclosures eating the fruit.