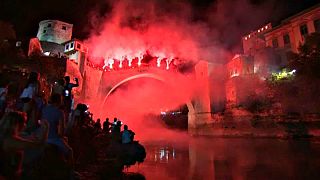 The party carried on into the night in Bosnia following the 451st edition of the traditional bridge-jumping competition in Mostar’s Old City on Sunday (July 30).

An estimated crowd of 10,000 residents and visitors turned out to see more than 40 competitors from several European countries take part in the contest.

The UNESCO monument was rebuilt as an exact replica of the original 16th century bridge which was destroyed during the 1992-95 Bosnian war.