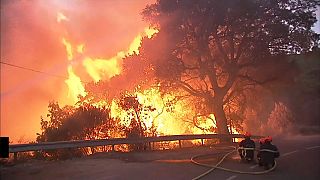 A combination of unusually hot, dry and windy regional weather has added to the problem, fanning the flames on the island that lies off the French coast in a corner of the Mediterranean near Italy.

Faced with the advance of the flames, many people were evacuated from their homes and welcomed into the gyms of neighbouring communes.

Some 3,000 hectares of land have burned along the Mediterranean coast, in the mountainous interior and on the island of Corsica.

Firefighters have worked overnight to try and bring the fires under control. Several firefighters were reportedly injured and slightly intoxicated but there were no reports of deaths.