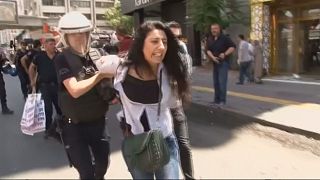 The two, an academic and a primary school teacher, were jailed two months ago over their hunger strike which a court ruled was conducted on behalf of a terrorist leftist group, the DHKP-C.

They started the strike after being dismissed from work with a government’s decree as part of a widening crackdown following last year’s failed coup attempt against President Erdogen.