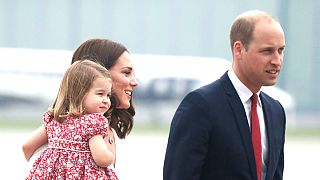 Britain’s Prince William and the Duchess of Cambridge arrived in Warsaw on Monday (July 17) on the first leg of a trip to Poland and Germany meant to underscore Britain’s friendly ties despite its talks to leave the EU.

The royal couple, accompanied by their children Prince George and Princess Charlotte, went to the Presidential Palace, where they were greeted by president Andrzej Duda and first lady Agata Kornhauser-Duda.

They were set to visit the Warsaw Uprising Museum – which commemorates a doomed 1944 battle against Nazi occupiers in which thousands died – and meet young businessmen at the Warsaw Spire building in the afternoon.

Later, they were due to take part at a Queen’s Birthday Party at the Orangery in Lazienki Park where about 600 guests were expected.

On Tuesday they will visit the Solidarity museum in Gdansk, where they will meet with the icon of Poland’s anti-communist struggle and the movement’s former leader, Lech Walesa, before heading for Germany on Wednesday.