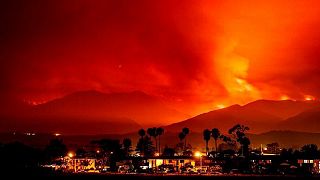 Updated: 12/07/2017
<p>Mongolia’s most important festival of the year is underway celebrating the nation’s warrior games – wrestling, archery and horse-racing.<br /> Soldiers in traditional uniforms carry “Great White Banners” into the stadium amid cheering crowds in the opening ceremony.<br /> The nine poles topped with white horsehair are ceremonial symbols dating back to the time of the 13th century leader Genghis Khan.<br /> The white banners were reintroduced in the early 1990s after the fall of communism and represent the independent Mongolian state.<br /> The opening ceremony showcases Mongolia’s heroes of the past, including Genghis Khan, who founded the Mongol empire, stretching to one fifth of the world’s inhabited land by the 13th century.</p>
no comment