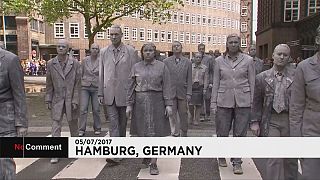 As Hamburg braces itself for G20 leaders and protests this week, an even more unusual sight confronted passers-by on Wednesday – hundreds of zombies!

People painted as grey clay figures took to the streets for a slow march before ripping off their clothes to reveal colourful outfits.

The message was aimed at the general public, encouraging people to ‘take off the crusty shells’ of apathy and experience the awakening of political engagement.

The ’1,000 shapes’ performance was warmly applauded by onlookers.

German Chancellor Angela Merkel will host leaders of the G20 leading economies in a two-day summit starting on Friday.