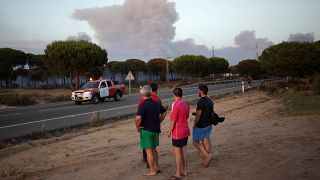 Updated: 26/06/2017
<p>Spanish firefighters battle to contain the blaze threatening the Doñana natural park in Andalucia. More than 2,000 people have been forced to evaucate, among them tourists.</p> <p>The fire is yet to reach the national park of the same name, declared a <span class="caps">UNESCO</span> World Heritage Site in 1994.</p>
no comment