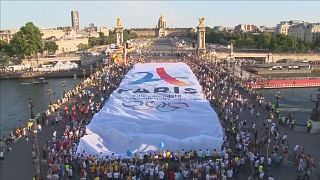 Updated: 25/06/2017
<p>A giant banner was unfurled at Paris’ Alexander <span class="caps">III</span> bridge on Saturday as the city marked the last day of its final push to host the 2024 Olympics.</p> <p>The French capital transformed itself on Friday into a giant Olympic park as part of its final campaign to woo officials from the International Olympic Committee.</p> <p>Paris and U.S. rival Los Angeles are the only two cities bidding to stage the 2024 Olympics, and the French capital held a string events over the weekend to promote its credentials.<br /> Paris last hosted the Olympics in 1924, while Los Angeles has held it twice – most recently in 1984.</p> <p>In July 2005 in Singapore, London pipped an over-confident Paris, which had lost out to Beijing for the 2008 Games, to win the right to stage the 2012 Summer Olympics, triggering tears in the French camp when the results were announced.</p>
no comment