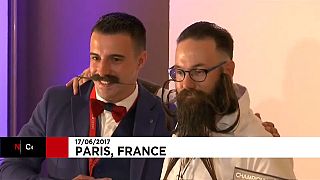 Men sporting hipster moustaches and Verdi beards gathered in Paris on Saturday, (June 17), for the first French Beard Championship, a national competition where 30 finalists in five categories faced off for the title of best beard.

The finalists had previously been put forward by a grand jury and paraded on a catwalk. Their beards were then judged by a jury made up of five people.

Richard Palatchi, who has grown his beard out for three and a half years, was taken aback when he won the audacious beard category, beating three other men in a free-style facial hair category. He said the only preparation he made was to get a quick trim at a barber shop on Saturday morning.

200 spectators were present at the championship, a surprisingly large turnout according to the organisers who hope to expand the competition next year.