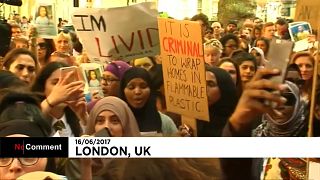 Several hundred protesters are said to have stormed a town hall in London to call for justice, after a deadly fire at a block of flats killed at least 30 people. They reportedly barged their way into the Kensington and Chelsea council building. Police allegedly barred their way and scuffles broke out.