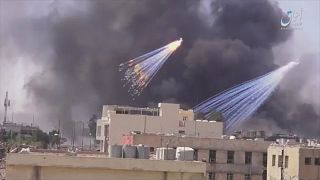 White phosphorus munitions were used in western Mosul on Saturday, Human Rights Watch said, based on their analysis of still photographs and videos taken by a number of television channels.

Human Rights Watch said in a statement sent to The Associated Press that based on analysis of photographs and video, the smoke rounds were artillery-delivered white phosphorus rounds.

The Iraqi ministry of defence did not directly confirm or deny the use of white phosphorus but said that at the request of Iraqi commanders, the coalition fired smoke rounds to protect a group of civilians fleeing IS snipers in the medical complex area by the Tigris river.

Its use is not specifically prohibited by the laws of war but considered problematic in densely populated areas because of its propensity to burn for a long time and cause horrific burn injuries.

HRW said the use of these munitions “raises significant concerns about potential harm to civilians from fires and intense burns” and urged Iraqi forces to “clarify their policy on the use of white phosphorus and to take all feasible measures to protect civilians in Mosul.”

The United Nations estimates that as many as 180,000 civilians may still be living in the IS-controlled areas of western Mosul.