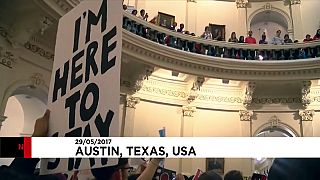 Protesters are calling for Texas lawmakers to undo their move on so-called “sanctuary cities.”

Hundreds of people gathered at the Austin’s capitol building Monday in protest of the already-passed senate bill four.

Monday was the last day of the legislative session but that did not stop protesters from trying to get a last-minute change.

The bill, passed earlier this month, will make it a crime for officials to ignore federal immigration detainer requests.

Opponents have called it a “show your papers” law fearing it empowers police to question someone’s immigration status at a traffic stop.