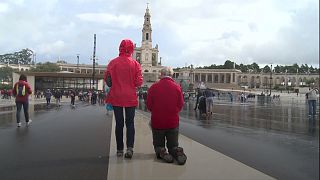 Pilgrims descend on Fatima ahead of Pope's visit

Mobs of pilgrims began to flock to Fatima to commemorate the 100th anniversary of the Marian apparitions and to see Pope Francis who is due to visit between May 12-13.

While the majority of pilgrims come from Portugal and neighboring Spain, a large number come from Europe, particularly Poland and Italy. In terms of numbers, some 1,000.000 pilgrims are expected to attend.

The pilgrimage is made by thousands of people also on foot. They walk for six or seven days and receive help and care along the route.