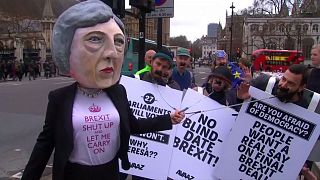 Demonstrators stage a protest outside of the Houses of Parliament ahead of the British PM Theresa May, triggering Brexit with Article 50.

The protesters, from group Avaaz, put on a performance with a puppet of the British leader with citizens muzzled and controlled by dog collars.

The group are against a “hard” Brexit and are calling on the government to listen to the people during the talks that will see Britain leave the European Union.