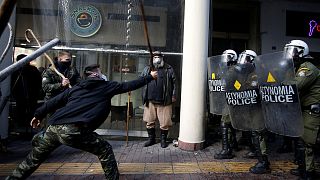 Greek farmers protesting against bailout-related income cuts on Wednesday clashed with riot police outside the Agriculture Ministry in central Athens. Police fired tear gas to prevent farmers from forcing their way into the ministry building, while protesters responded by throwing stones. No injuries or arrests were reported. More than 1,000 farmers, many of whom had travelled overnight from the island of Crete, took part in Wednesday’s protest. Protesters are angry at increases in their tax and social security contributions, part of the income and spending cuts Greece’s left-led government has implemented to meet bailout creditor-demanded budget targets.