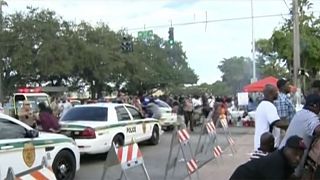 11-year-old among 8 wounded in Miami shooting

Eight people, including five juveniles, have been wounded in a shooting at a park in Miami.

Police say the age of the victims ranged from 11 up to 30.

Five are said to be in a stable condition in hospital while one is described as “critical”.

Two people are being questioned by police.