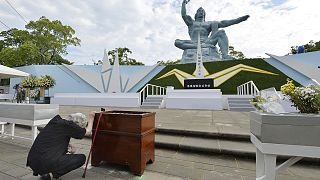 The Japanese city of Nagasaki marked the 71st anniversary of its atomic bombing on Tuesday, as the local mayor called on the world to abolish nuclear weapons.

Speaking at the ceremony at the Peace Park, Mayor Tomihisa Taue hailed US President Barack Obama’s visit to Hiroshima this year as a “starting point” to establishing a world free of nuclear weapons.