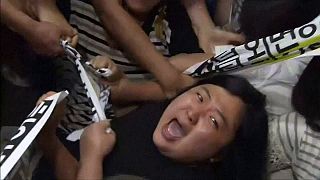 Student protesters in South Korea show their anger over a Japanese government-funded foundation to support “comfort women” – females who were forced to work in Japan’s wartime brothels.

Nearly two dozen college students held the protest moments before the start of a news conference tied to the official launch of the foundation.

Up to 200,000 women are estimated to have been forced to be sex slaves for Japanese soldiers during WW2, many of them Korean.

Seoul and Tokyo reached a landmark agreement to resolve the ‘comfort women’ issue in December last year, including a Japanese apology and ​7.47 million euros​ for the surviving victims.