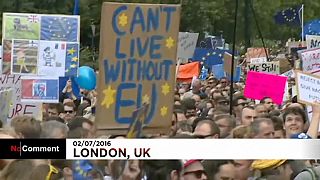 'I can't live without EU'

Ten of thousands of people showed their support for the European Union in London on Saturday (July 2).

The rally came just over a week after the nation voted in a referendum to leave the bloc.

London was among the prominent areas, which also included Scotland and Northern Ireland, to vote against Brexit.