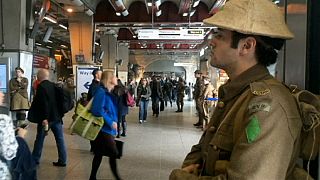 Soldiers on the streets to mark one of WW1's deadliest battles

Actors dressed as World War I British troops appeared in London and public spaces across the UK on Friday (July 1, 2016) to mark the 100th anniversary of one of the conflict’s most devastating battles.

Standing silent and expressionless, the actors represented soldiers killed in the Battle of the Somme, in France – the largest clash of the western front that saw over a million casualties.