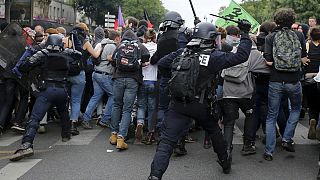 Riot police and demonstrators clashed in Paris on Tuesday, June 28, as thousands of protesters took to the streets under heavy police presence to demonstrate against changes to labour laws that will make hiring and firing easier and give employers more say in work and pay negotiations.

The protest was the latest in President Francois Hollande’s four-month confrontation with the unions, which has divided the governing Socialists and dragged the unpopular leader’s ratings to new lows 10 months before a presidential election. In a bid to prevent a repeat of the intense violence of earlier protests, metal fences were erected along Tuesday’s route. Police had orders to arrest anyone attempting to hide their faces in clothing or to bring in weapons.