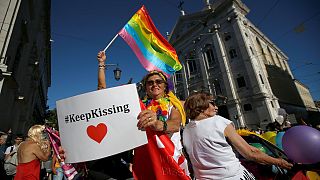 Thousands of people marched in the Portuguese capital Lisbon on Saturday in the traditional Gay Pride parade.

Some participants held a banner displaying the names and pictures of the 49 people who died in the shooting at a gay nightclub in Orlando last week.

Organisers estimate that this year’s Gay Pride parade was the largest to date, with at least 6,000 people taking part.