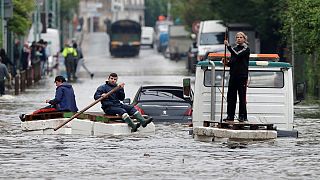 Heavy rain and flooding in France and Germany

Heavy rain and flooding in France and Germany

France In Nemours, 3,000 out of 13,000 inhabitants had to be evacuated from the town centre. Firefighters rescued inhabitants using inflatable boats.

In Nemours, 3,000 out of 13,000 inhabitants had to be evacuated from the town centre. Firefighters rescued inhabitants using inflatable boats.

At 4.25 metres, water levels in Moret-sur-Loing, bisected by the Loing river, a tributary of the Seine, are at levels not seen since the devastating floods of 1910.

The centre of town is totally under water.

4000 residents had to be evacuated from their homes, schools and shops are closed.

Paris: Seine at its highest level for more than 30 years

The water level of the Seine in Paris continues to rise, with the peak expected to be reached by midday.

It follows days of torrential rains that have claimed lives in France.

Officials forecast the Seine could peak at six metres, its highest level for over 30 years in central Paris.

They are insisting this is still well below the level where it would threaten residents and businesses.

Mud, debris and overturned cars dominate the scene in the Bavarian town of Simbach on the Austrian border after flooding killed several people.

Others are still missing.