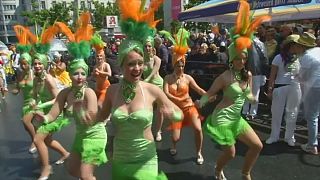 Berliners braved the cold to toast cultural diversity at one of Germany’s biggest summer carnivals.

Hundreds of thousands of people turned out for the Carnival of Cultures, despite wind that left temperatures as low as 11 degrees.

The event is traditionally held in the city’s Kreuzberg district which has Berlin’s biggest foreign population and Germany’s largest Turkish community.