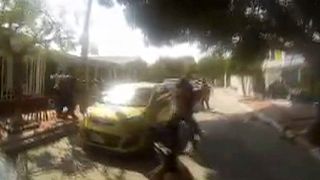 Updated: 26/02/2016
<p>A dramatic first-person video posted to Facebook by Colombian police shows a shootout with and arrest of suspects in the northern city of Barranquilla. </p> <p>Local reports said police caught the suspects “red-handed” as they were carrying out a burglary, with four people arrested.</p>
no comment