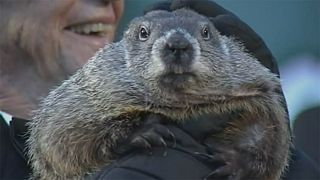 Groundhog Day in the USA

This is Groundhog Day in the USA – a traditional holiday that has become more popular since the 1993 film of the same name.

According to folklore if a groundhog leaves its burrow on this day and it’s cloudy, then spring will come early. If it’s sunny, and the groundhog sees its shadow, winter weather will persist.

This footage shows a ceremony in Pennsylvania, which has been forecast an early spring after groundhog Punxsutawney Phil failed to see his shadow.