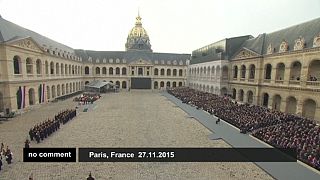 France has paid tribute to the 130 people killed in the terrorist attacks in Paris on 13 Nov 2015. At a solemn ceremony at the city’s Les Invalides monument on Friday, victims’ families joined survivors, emergency service workers, religious leaders and politicians for a national memorial service at which the names of those massacred by Islamist gunmen and suicide bombers were read out.