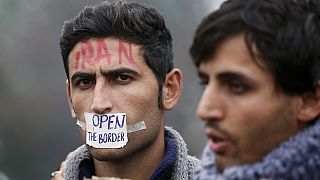 Migrants stranded on the FYR Macedonia-Greece border broke into pro-German chants as they continued their protests over passage into western Europe.

They were demonstrating over Balkan countries introducing a policy of filtering migrants based on their country of origin.

The protests saw some begin a hunger strike, while others sewed their lips shut.