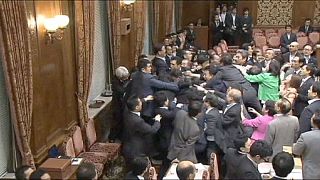 This was the chaos in Japan’s upper house after opposition lawmakers tried to physically stop new security legislation from being passed.

The law would allow Japanese troops to fight abroad for the first time since World War II.

The government says the changes are necessary to meet new threats, such as from China, while opponents argue it violates the country’s pacifist constitution.

The legislation was passed by a panel in Japan’s upper house; the government aims to get voted into law by the upper house this week.