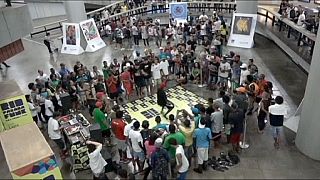 Dancers took over a Rio de Janeiro metro station as part of a city-wide movement celebrating the music and moves originating from the city’s favelas, or slums.

Called Baile Funk, the genre was popularised in Rio’s poorest communities in the 1980s and is seen as Brazil’s answer to American Hip Hop.

The metro station spectacle saw eight teams battle it out for a place in the final of a dance competition.