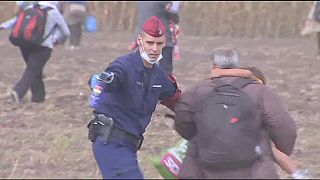 Updated: 09/09/2015
<p>These are the chaotic scenes at the Hungary-Serbia border where police appeared powerless to stop scores of migrants and refugees making their way to Budapest and beyond.</p> <p>Migrants broke away from a provisional camp near Roszke and made a run for it across open fields, according to Reuters.</p> <p>A fence built on the Hungary-Serbia border is seemingly having little impact on stopping the migratory flow northwards.</p>
no comment