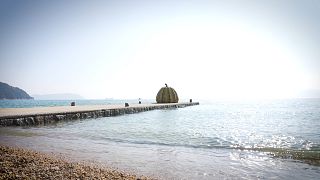 Naoshima, in Japan’s Prefecture of Kagawa, is about a 40-minute boat ride into the Seto Inland Sea from Takamatsu. Upon arrival, it's impossible not to be taken aback by the calm waters and colours which resemble those of the Mediterranean.

The approach on the ferry serves up a feast for the eyes because, even from afar, you can make out the island's most famous works of art.

Opting for a bicycle as your mode of transport allows you truly explore the small island’s many sculptures, museums, workshops and art galleries.

The Benesse Museum, at the southern end of the island, is a truly amazing structure. The immense site boasts a well-kept garden that’s brimming with artistic masterpieces, as well as an inside exhibition area that takes your breath away.

The structure was designed by the internationally renowned Japanese architect, Tadao Ando. This alone, as explained by the President of the Benesse Art Site, Mr Ryoji Kasahara, is a guarantee of wonder. It’s as if the structure were a continuum of the land -- as if it were part of the island itself. Glancing away from an artistic masterpiece to catch a sight of the sea of Naoshima is a continuous thrill.

The museum sill appears fresh and innovative, despite being 30 years old.

Just a stone’s throw away from the Benesse Museum is another Naoshima gem -- the Chichu Art Museum. Chichu in Japanese literally means 'underground': and this is what makes the Chichu so unique: it is completely underground. The museum houses the collections of just three artists: Monet, De Maria and James Turrell.

The Prefecture of Kagawa is nicknamed the 'Prefecture of udon', or 'Udon -Ken' in Japanese, because this particular type of noodle has its origins here. More udon is eaten in this area of Japan than anywhere else in the country.

I wanted to include udon in my travel experience, both by tasting it and by making it with my own hands. I was helped by Sensei Motoko, at the Udon House.

The whole process takes about six hours and includes the preparation of the dough, 'walking' on the dough, rolling it out with a rolling pin (after rising for about two hours) and cutting it with a special machine that gives the udon its perfect shape.

What I found incredible was that the founder of this establishment drew inspiration from a pasta workshop she held in Tuscany!

Back in Tokyo, she decided that she wanted to do something similar, but with udon: and so, the structure was also converted into a bed and breakfast where, after having had the experience of creating udon, you can sleep and also enjoy other experiences, such as harvesting vegetables on the adjacent farm to prepare tempura to accompany the udon.

I ended my day by going for a walk on Chichibugahama beach, which has become a popular location for taking spectacular pictures.