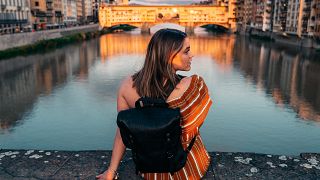 An expert on moving to Italy shares his top tips and biggest mistakes to avoid for soon-to-be expats.   -   Copyright  Karsten Winegeart
By Rebecca Ann Hughes  •  Updated: 23/11/2022

Damien O’Farrell moved from Ireland to Italy nearly 35 years ago and has since started a business giving would-be expats professional advice about relocating.

Having originally only intended to stay in Italy for two months, he had a lot to learn about a permanent move.

Here are his top tips for anyone thinking of relocating to Italy.

Don’t underestimate the importance of learning the language

For O’Farrell, from personal experience, not learning Italian is the number one mistake someone can make when thinking of moving to Italy.

He says many people erroneously think they can get by using English. “It is so difficult to do anything without the language,” he says, “it’s an uphill battle.”

Besides struggling with bureaucratic hurdles like registering for residency, O’Farrell says not knowing the language means job opportunities are very limited.

It also makes it hard to make friends and feel like part of a community.

Make sure you understand your legal status in Italy

In order not to fall foul of the law, O’Farrell reminds soon-to-be expats to be fully aware of their immigration status. He says one of the most asked questions on his website is how to live legally in Italy.

Non-EU citizens can come to Italy for tourism reasons and stay for up to 90 days in any 180-day period. However, those wanting to remain longer need to apply for a visa.

EU citizens who wish to live permanently in Italy must register as residents at their local town hall within 90 days of arriving.

“You should be prepared to show a work contract or the means by which you will be able to support yourself, a rental contract, an Italian tax code and your passport,” O’Farrell says.

A tip for people thinking of moving to any foreign country is to be careful where you source information.

While O’Farrell thinks expat groups and forums are excellent ways for members to share tips and encourage each other, he stresses that the information provided should never be considered as professional advice or legal counsel.

“There is not a day goes by that I don’t hear from an expat who went the do-it-yourself route and ended up with unexpected tax bills, immigration issues, landlords who won’t give back the deposit, and so on,” he says.

While some aspects of expat life can be sorted out on your own, O’Farrell emphasises that tax, immigration or legal matters are best discussed with a professional.

It’s ok to have a ‘day off’ from Italian life

Italy and its culture can be quite full on. “Some people may not get all the cultural rules of Italy immediately and that is alright,” says O’Farrell.

Even after many years living in Italy, there’s nothing wrong with needing a break every now and again. “Occasionally, people will need some ‘treats’ from their home country and that is fine,” he says.

“I realised a long time ago that I could not change sixty million Italians, so I decided to bend like the willow, rather than resist like oak,” he adds.

Don’t expect it to be one big dolce vita

For O’Farrell, the greatest mistake potential expats make is having an overly romanticised expectation of Italy.

“People expect to move to a village in the middle of nowhere and build a thriving career,” he says, “but that’s not going to happen.”

When O’Farrell takes on a new client, he says the most important thing is understanding what they want out of their move and if it is realistic.

“You need to remember that for some careers or interests, Italy might not be the best place,” he says. “If you are looking to immerse yourself in a country that’s rich in cuisine, history and culture, then that’s another story.”

O’Farrell adds that where you choose to live in Italy should also be dependent on your economic situation.

“Small villages have fewer opportunities for well-paid jobs but if you can work remotely you might find cheaper housing there,” he says.

One of the best ways to find out if Italy is going to be right for you, according to O’Farrell, is to undertake a trial period first.

“You need to come and test the waters, try living in a small town and take it from there,” he says.